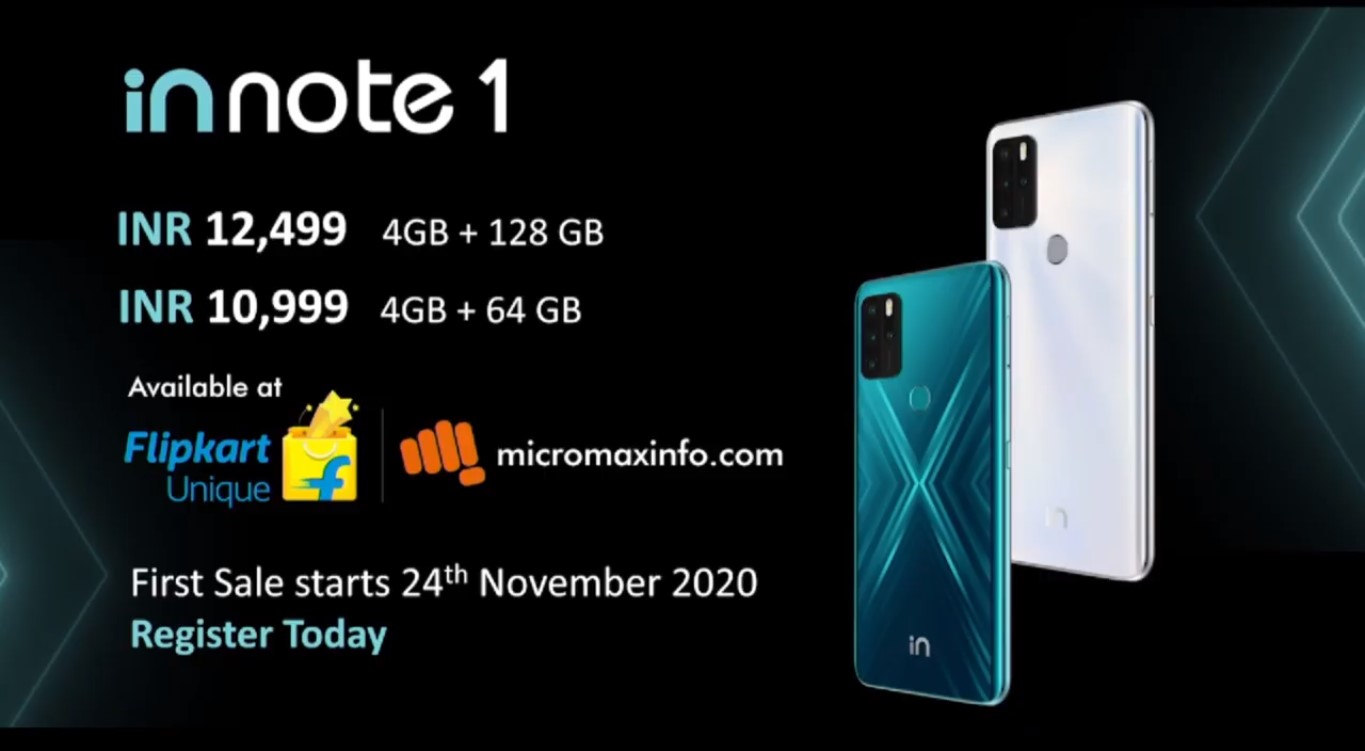 Micromax In Note 1, Micromax In 1b Smartphones with MediaTek Processor Launched

Micromax has launched In series smartphones in India with trending features and specifications. The Micromax In series comprises of Micromax In Note 1 and In 1b smartphones with a powerful MediaTek processor and is priced at an affordable price point. Micromax co-founder Rahul Sharma did a short launch event without any major show. He added that the new handsets will be pre-loaded with stock Android 10, which will provide a complete stock experience without any ads or bloatware. You will not find unwanted apps. Rahul also revealed that the device will receive two years of free software updates. The launch of Micromax handsets with latest features will bring shock tremors to companies like Xiaomi, Realme, Vivo, and Oppo. During the launch event, Sharma conducted a short virtual tour of its manufacturing facility in Bhiwadi. The entire production process of the development of new smartphones was explained in detail.

The Micromax In Note 1 features a 6.67-inch FHD+ punch-hole display with a resolution of 1080×2400 pixels. On the internals, the In Note 1 is powered by a MediaTek Helio G85 processor, 4GB RAM coupled with up to 128GB expandable internal storage. Talking about the optics, the Micromax In Note 1 ships with a 48MP primary camera coupled with 5MP secondary and dual 2MP sensors respectively, which can used for macro and depth captures. The camera includes LED Flash with night vision support. You can capture selfies via a 16MP sensor with a 78-degree wide-angle lens. You can also shoot GIFs using the front camera instead of images and videos.

In addition to 4G VoLTE, the Micromax In Note 1 provides support for Wi-Fi, Bluetooth, GPS, A-GPS, and USB Type-C port. The handset includes fingerprint sensor on the rear alongside a traditional headphone port. The company claims that the device is really a battery powerhouse with a 5000mAh battery with support for 18W fast and reverse charging respectively. You will find fast charger inside the product box.

The Micromax In Note 1 is available in 4GB RAM variant comprising of both 64GB and 128GB internal storage. While the 64GB storage model is priced at Rs 10999, the 128GB variant will be up for grabs at Rs 12499. You will be able to purchase In Note 1 on Flipkart on November 24, 2020. The stocks will be limited and you will have to buy quickly to avoid stock issues. We expect Flipkart to throw in exciting bank discounts and cashbacks.

Micromax In 1b Specifications

The Micromax In 1b is equipped with a 6.52-inch HD+ waterdrop notch display. Under the hood, the In 1b gets adequate processing power via Helio G35 processor and will be available in 2GB and 4GB RAM variants. While the 2GB RAM model comes with 32GB storage, the 4GB RAM variant offers 64GB storage. You will be able to expand the storage via a microSD card. On the optics, Micromax In 1b comprises dual cameras with 13MP primary and 2MP secondary depth sensors respectively. The selfie side offers an 8MP sensor. The smartphone includes all standard connectivity features as its big brother In Note 1. The device borrows power via a 5000mAh battery with support for 10W fast and reverse charging functionalities.

The Micromax In 1b is available in 2GB and 4GB RAM variants consisting of 32GB and 64GB storage models. The 2GB RAM with 32GB storage is priced at Rs 6999, while the premium 4GB RAM alongside 64GB storage will hit shopping cart for Rs 7999. The first sale will happen on November 26 via Flipkart and micromaxinfo.com.

Oppo K7x With Dimensity 720 Processor Launched: Everything you need to know