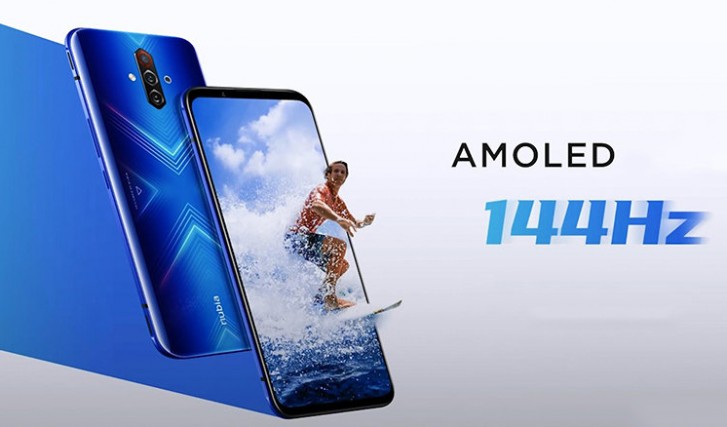 Nubia has announced the launch of Nubia Play with a mind-blowing 144Hz AMOLED display. Previously, the company had released Nubia Red Magic 5G smartphone with a higher refresh rate. The highlight of the Nubia Play handset is the addition of a 5100mAh battery, which delivers an extended battery life. The integration of capacitive shoulder pads also works like trigger buttons while gaming in landscape mode. The handset provides support for 5G via a powerful Snapdragon X52 processor.

The Nubia Play features a 6.65-inch FHD (2340×1080) display with a 144Hz refresh rate alongside touch sampling rate of 240Hz. You will not find a hole-punch placed on the display. Under the hood, the Nubia Play is powered by a Snapdragon 765G processor paired with 6GB and 8GB RAM alongside 128GB and 256GB UFS 2.1 internal storage capacities. The 128GB model is available with 6GB and 8GB RAM, while the 256GB storage variant carries 8GB RAM. The company has adopted ICE 2.5 rack-mounted liquid cooling system, which emits less heat during extreme gaming sessions. The handset is pre-loaded with Nubia UI 8.0 based on Android 10 operating platform.

Talking about the optics, the Nubia Play carries a triple camera comprising of a 48MP (Sony IMX582) primary sensor, an 8MP ultra-wide-angle sensor, and a 2MP depth sensor. The front-facing camera offers a 12MP sensor using which you can capture stunning selfies. The devices come with a 5100mAh battery with support for 30W PD fast charging technology. Nubia misses the adoption of wireless charging but we expect the functionality in the upcoming releases. The in-display fingerprint sensor can be used to unlock the phone.

The 6GB RAM model with 128GB storage is priced at CNY 2399, while the 8GB RAM variant is up for grabs at CNY 2699. The premium 8GB RAM model with 256GB storage ships with a price of CNY 2999. The handset is available for pre-order in China. The official sale will start from April 24. You will be able to buy the device in Black, Blue, and White color variants. The company is yet to reveal the international availability of the new handset.