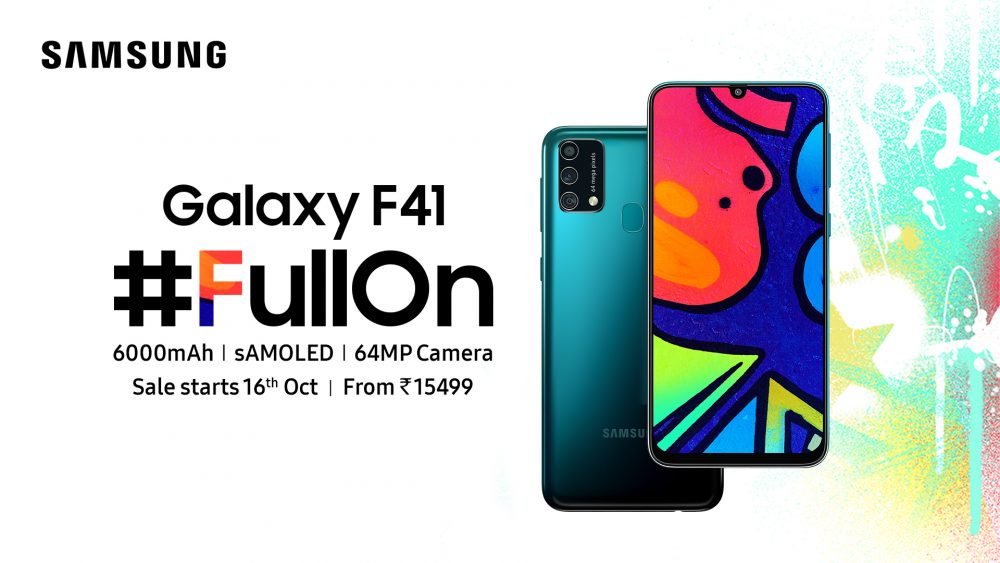 Samsung has launched the Galaxy F41 in India with a massive 6000mAh battery. The smartphone works under Exynos 9611 processor and is considered to be useful for young generation consumers. The handset has been designed and developed in partnership with Flipkart and will be available for sale during the upcoming Big Billion Days.

The Samsung Galaxy F41 is equipped with a 6.4-inch FHD+ SAMOLED Infinity U display, Exynos 9611 processor, 6GB RAM with up to 128GB expandable internal storage. You can extend the storage of the device up to 512GB. A powerful 6000mAh battery supplies adequate power to the device. The device is available in both 64GB and 128GB storage models.

On the optics, the Samsung Galaxy F41 carries a 64MP primary camera coupled with an 8MP ultra-wide lens and a 5MP depth lens that can be used for portrait captures. The Single Take functionality enables you to capture seven photos and three videos with a single click. The handset provides support for Face Unlock and a rear fingerprint sensor. The device is pre-loaded with One UI 2 based on Android 10 operating platform.

As part of the launch, the Samsung Galaxy F41 will be available at Rs 15499 instead of the retail price of Rs 16999. You will be able to purchase the device on October 16 during Big Billion Days. Flipkart is also offering a 10 percent discount if you pay using SBI debit or credit cards. You will receive the benefit of Flipkart Smart Upgrade program, which entitles you to exchange Galaxy F41 with a brand new device after 12 months.