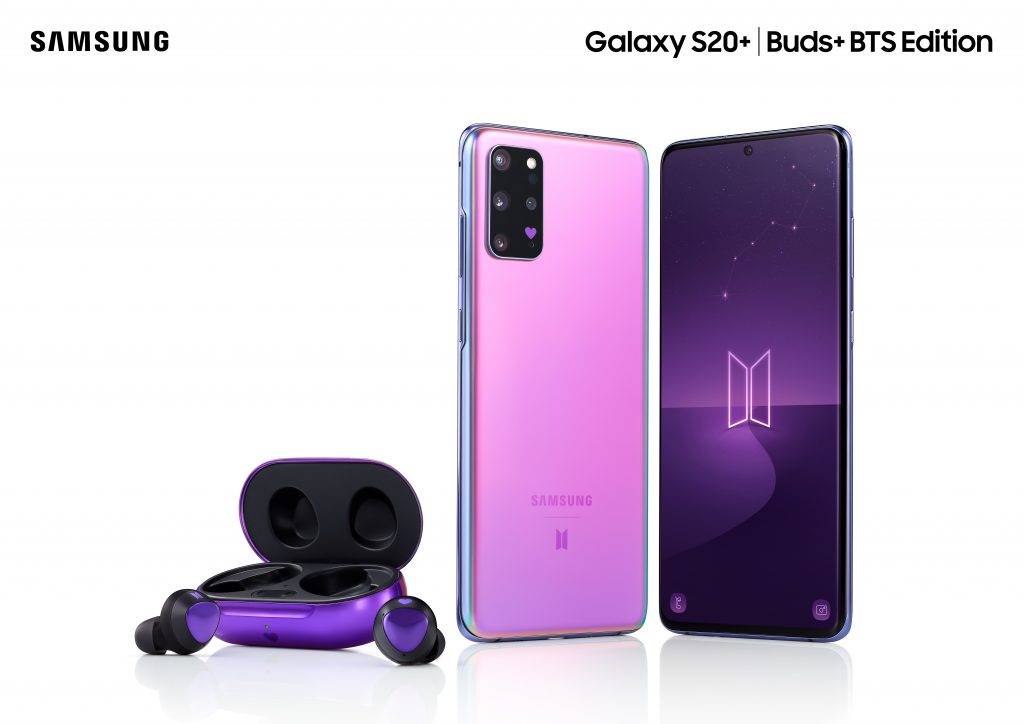 The Samsung Galaxy S20+ BTS Edition flaunts a 6.7-inch QHD+ (1400×3200) AMOLED edge-to-edge punch-hole display. The screen bears a refresh rate of 120Hz, which helps you to work with apps quickly. Moreover, the display also features an integrated fingerprint sensor. You will find BTS logo at the bottom.

Under the hood, the Galaxy S20+ BTS Edition is powered by an Exynos 990 processor, 8GB RAM paired with 128GB internal storage. The device is pre-loaded with One UI 2.1 based on Android 10 operating platform. The handset borrows power via a 4500mAh battery with support for 25W wired, 15W wireless, and 9W reverse-wireless fast charging technology.

The rear side features a quad-camera mechanism coated with purple finish. The Samsung Galaxy S20+ BTS Edition features a quad-camera comprising of a 12MP primary sensor, a 64MP telephoto sensor, a 12MP ultra-wide-angle sensor alongside a ToF sensor. Surprisingly, the selfie front offers a 10MP sensor, which is weird. We never found any smartphone with a 10MP front camera. You will be able to shoot 8K videos with the help of the rear camera.

The Galaxy Buds+ BTS Edition ships with a purple accent alongside BTS logo on the top side of the buds. The company has included triple microphones with support for Ambient Sound technology. The earbuds are designed to provide enhanced noise isolation. The dual speaker system is complemented by an 85mAh battery with the capability to deliver 11 hours of battery life. The addition of Bluetooth 5 helps in the reduction of power and heat arising out of it.

The Samsung Galaxy S20+ BTS Edition can be pre-ordered starting June 19. You can now pre-order Galaxy Buds+ BTS Edition via Weverse ship in the US and South Korea at $199, which equates INR 15200. The newly launched smartphones will be available for sale starting the seventh anniversary of the BTS fan collection, which falls on July 9.